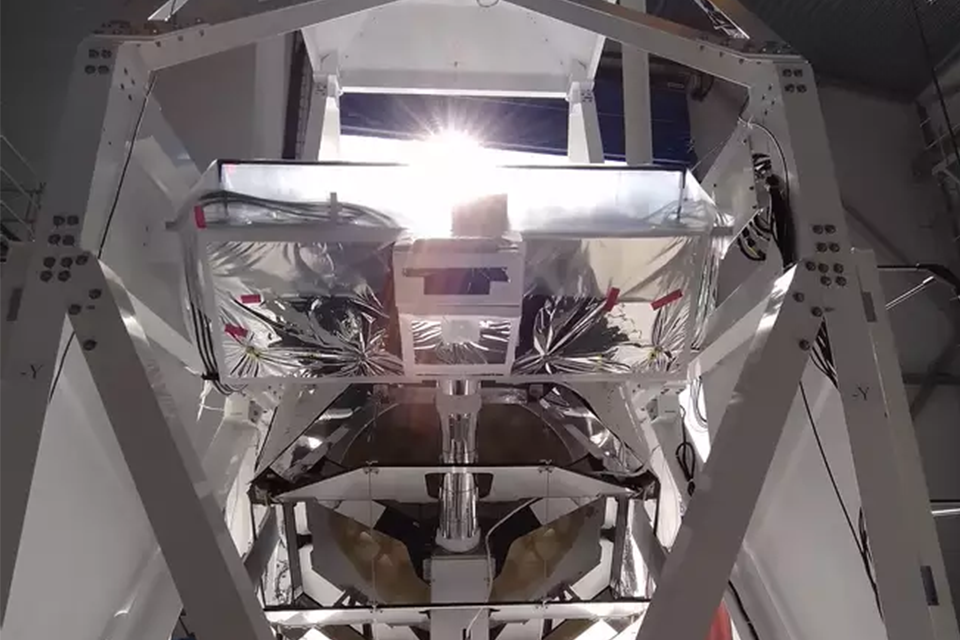 The ballon-borne observatory has reached an important milestone

Approximately a month before it begins its research flight in the stratosphere, the balloon-borne solar observatory Sunrise III has looked at the Sun for the first time from its launch site at the Arctic Circle. In June, Sunrise III will take off from Esrange Space Center, the Swedish Space Agency's (SSC) balloon and rocket base in Kiruna (Sweden), and will climb to an altitude of about 35 kilometers. During its flight of several days, it will then take unique measurements of the Sun. In this way, processes in the chromosphere, the highly dynamic layer between the visible surface and the outer atmosphere of the Sun, will become visible more precisely than ever before. In the remaining weeks until launch, the technical and scientific teams from Germany, Spain, Japan, and the USA will prepare all systems and the scientific instruments for their mission and rehearse flight procedures and operations.

Since the beginning of April, Esrange Space Center in Kiruna (Sweden) has been the scene of the final preparations for the flight of Sunrise III. Disassembled into individual parts, all the hardware, including the gondola, the solar telescope, and the scientific instruments, had traveled there by truck from the Max Planck Institute for Solar System Research (MPS) in Göttingen (Germany). The MPS is leading the mission. Since then, the icy temperatures of down to -15 degrees Celsius and driving snow that prevailed upon arrival have given way to more tolerable conditions. The so-called "First Light," Sunrise III’s first glimpse of the Sun, took place at temperatures around freezing.

"Launching from the Arctic Circle involves a considerable logistical effort," says Sunrise III project manager and MPS scientist Andreas Korpi-Lagg, looking back on the last few months. But for the scientific success of the mission, the remote launch site in the far north is crucial. Since the Sun does not set beyond the Arctic Circle in summer, Sunrise III can record observational data around the clock during its flight. On the ground, researchers studying the Sun find the best viewing conditions in places such as Hawaii, the Canary Islands, and the U.S. Southwest. But there, even during the best observation season, usually in early summer, measurements are typically limited to a few hours a day.

Another of Sunrise III’s advantages is its observing altitude. At launch, a huge helium-filled balloon lifts the six-meter-high observatory into the stratosphere to a height of approximately 35 kilometers. The wind then carries both westward. At this altitude, which almost marks the transition to space, the atmosphere is so thin that air turbulence does not obscure the view. In addition, Sunrise III has access to the Sun's ultraviolet radiation, most of which is absorbed by Earth's atmosphere. "Only probes in space offer better observational conditions," says Sunrise III Principal Investigator Sami Solanki, director at the MPS.

During the First Light in Kiruna, Sunrise III remained on the ground. The milestone does not primarily provide scientifically meaningful data from the Sun, but rather the opportunity to test and calibrate all systems with natural sunlight. Carefully, the crane in the large hall, that serves as Sunrise III’ “home” at Esrange Space Center, lifts the six-ton observatory a few centimeters off the ground. The hall door opens. For the first time, the gondola automatically aligns itself with the Sun - just as it will during the research flight. Rays of sunlight fall into the telescope and from there reach the scientific instruments and the image stabilization system. In front of their computer screens deeper in the hall, the scienctific and engineering teams monitor how the systems respond.

How we explore the Sun

The Sunrise III Mission in 2022

Sunrise III is equipped with three scientific instruments. Together, they provide comprehensive observational data from the region just below the Sun’s visible surface to the upper chromosphere, about 2,000 kilometers above. They capture infrared, visible, and ultraviolet light from this region, thus making it possible to visualize dynamic processes and magnetic fields. In addition, Sunrise III contains a sophisticated image stabilization system. It ensures that the observatory records highly precise data even on the wobbling balloon. If a target shooter wanted to shoot similarly "wobble-free," he would have to hold his equipment so steady that the shot is deflected by no more than the thickness of a hair over a distance of seven kilometers.

The Sun's chromosphere lies between its visible surface and its outer atmosphere, the corona. In this connecting layer, an enormous temperature jump takes place: from the comparatively moderate 6000 degrees Celsius at the surface up to 20,000 degrees Celsius. In the layers above, temperatures then rise to as much as a million degrees Celsius. "Even after decades of modern solar research, the chromosphere is still mysterious," Solanki says. "A multitude of processes that we don’t yet fully understand occur in the chromosphere and supply the corona with energy," he adds. In concert, these processes not only generate the incredibly high temperatures of the corona, but also facilitate the violent eruptions in which the Sun repeatedly hurls particles and radiation into space.

Several weeks will pass before Sunrise III's adventurous flight will begin and the observatory will collect its first data. During this time, all systems will be commissioned and in-flight procedures will be practiced. "The flight will only last a few days. Everything has to work smoothly right from the start," Korpi-Lagg says. Depending on the wind speed, Sunrise III will reach the uninhabited regions of northeastern Canada after about five to seven days. There, the observatory will land by parachute.

The exact launch date, however, is determined by the weather. If there is precipitation, Sunrise III cannot take off; calm winds are also required. "Our preparations are going according to plan. We will be ready to launch in early June," says Korpi-Lagg. The final phase of the adventure has begun.