Gamma light from a nova 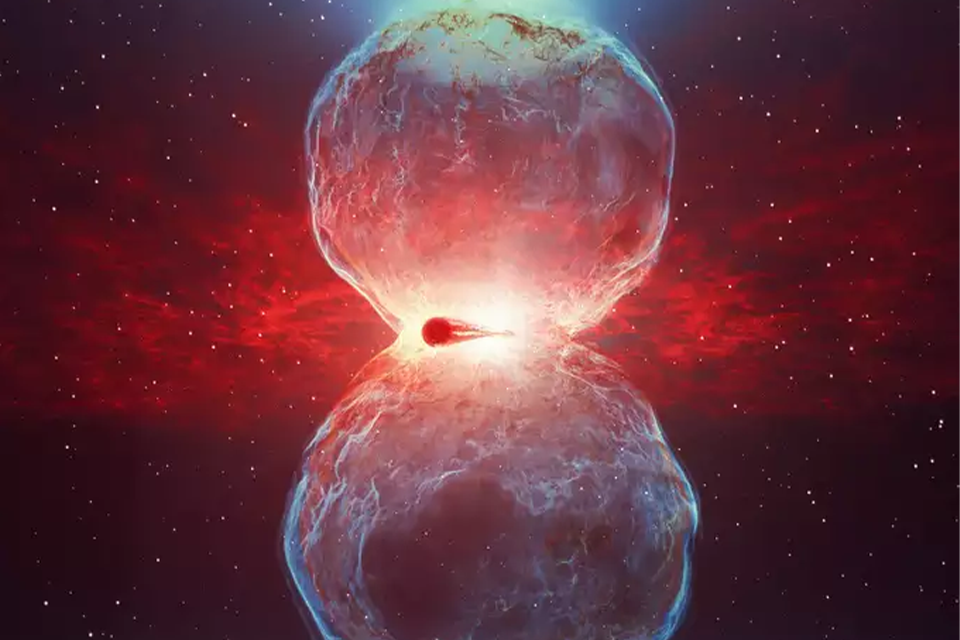 With the H.E.S.S. observatory and the Fermi satellite, researchers track the eruption of RS Ophiuchi

For the first time, it has been possible to observe the outburst of a nova in very high-energy gamma light and to follow the glow and subsequent fading over a period of one month. The researchers combined the data from the H.E.S.S. observatory with those from the Fermi satellite and gained insights into the processes underlying the emission of gamma rays. The scientists were surprised to find that the nova apparently accelerates particles to the theoretical limit.

In the constellation of Ophiuchus (the Serpent Bearer) there is a double star system called "RS Ophiuchi", about 7500 light years away, consisting of a white dwarf and a red giant. Their separation is only about one and a half times the distance between the Earth and the Sun, close enough for the white dwarf to continuously pull matter from the atmosphere of its companion.

Episodically, enough material is accumulated on the white dwarf's surface for the strong gravity to ignite a thermonuclear explosion. Between 1898 and 2006, astronomers have previously observed eight such nova outbursts of RS Ophiuchi. On the of August 8, 2021, another outburst occurred that was visible even to the naked eye.

Starting the following night, H.E.S.S. set its sights on the star and was indeed able to detect it. “This is the very first observation of a nova in very-high-energy gamma radiation,” says Alison Mitchell of the Friedrich-Alexander-Universität Erlangen-Nürnberg and principal investigator of the H.E.S.S Nova programme. For an unprecedented period of one month – with a brief period of interruption around full moon – H.E.S.S. was able to track the evolving luminosity of the nova.

Complementing the H.E.S.S. observations were lower-energy gamma-ray measurements by the Fermi satellite. Combining data from the two instruments revealed unique insights into the processes underlying the gamma-ray emission and their evolution. In both energy ranges, the rate of gamma-rays received by the instruments displays a period of steady increase before decaying at the same rate.

However, the peak in the emission as measured by H.E.S.S. was delayed with respect to that in the Fermi energy range by two days. Moreover, the energy spectra measured by the two instruments are consistent with a continuous curve that gradually evolves from night to night: it becomes flatter, but broader with time. This suggests that the gamma rays observed by Fermi and H.E.S.S. have a common origin: accelerated particles whose maximum energy increases in the first days after the explosion.

“The most likely scenario is that protons and other nuclei are accelerated efficiently at the expanding explosion shock front and collide with compressed material from the stellar wind of the red giant. This releases gamma rays” explains Brian Reville of the MPI for Nuclear Physics, who played a major role in the model calculations needed to interpret the data.

This implies that such nova outbursts are efficient cosmic accelerators, accelerating particles to energies that reach their theoretical maximum and supplying their surroundings with abundant high-energy particles – a significant contribution to cosmic rays in the nova’s neighbourhood. This finding supports the prevailing theory that the fast shocks of young supernova remnants expanding into the dense winds of massive stars – extreme analogues of the nova RS Ophiuchi – drive production of the highest-energy Galactic cosmic rays.

The High Energy Stereoscopic System, or H.E.S.S. for short, located in Namibia, consists of five Cherenkov telescopes that are used to study very-high-energy cosmic gamma rays. The large telescope is equipped with a state-of-the-art camera (FlashCam) that was partly developed at the Max Planck Institute for Nuclear Physics in Heidelberg. The FlashCam design is currently being further optimised for the next-generation gamma-ray observatory, the Cherenkov Telescope Array (CTA). “The new camera has been in operation since the end of 2019, and with this measurement it has proven the potential of this technology,” says Simon Steinmaßl, a doctoral student at the MPI for Nuclear Physics, who was involved in the analysis of the camera data.