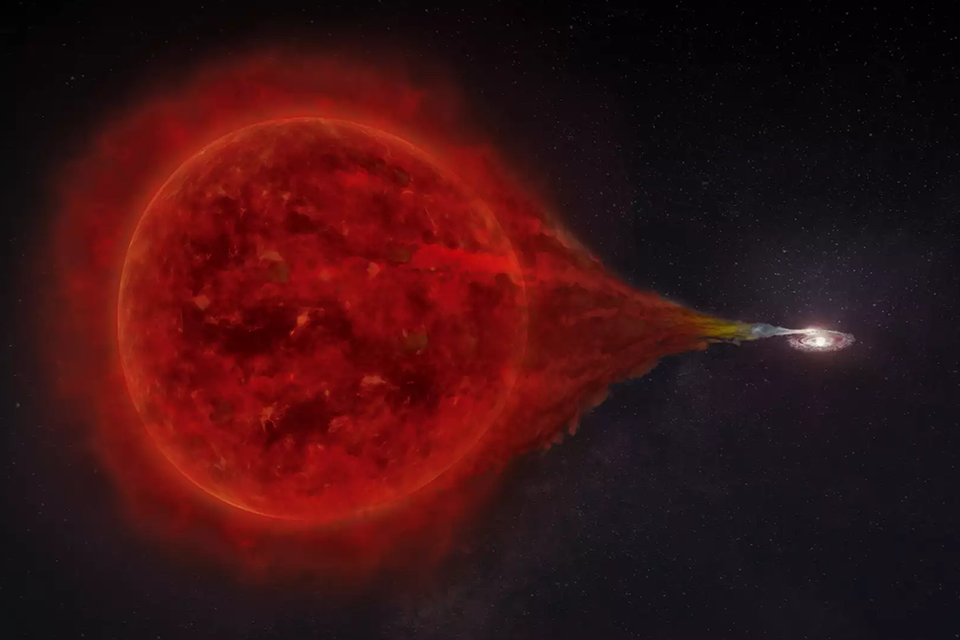 Nova outbursts are evidently a new source for cosmic rays

The MAGIC telescopes have observed the nova RS Ophiuchi shining brightly in gamma rays at extremely high energy. The Gamma rays emanate from protons that are accelerated to very high energies in the shock front following the explosion. This suggests that novae are also a source of the ubiquitous cosmic radiation in the universe which consists mainly of protons rich in energy, which race through space at almost the speed of light. The work was published in Nature Astronomy.

Light on, light off – this is how one could describe the behavior of the nova, which goes by the name RS Ophiuchi (RS Oph). Every 15 years or so, a dramatic explosion occurs in the constellation of the Serpent Bearer. Birthplaces of a nova are systems in which two very different stars live in a parasitic relationship: A white dwarf, a small, burned-out and tremendously dense star – a teaspoon of its matter is approximately the same weight as a middle size car – orbits a red giant, a star that will soon burn up.

The dying giant star feeds the white dwarf with matter shedding its outer hydrogen layer as the gas flows onto the nearby white dwarf. This flow of matter continues, until the white dwarf over(h)eats itself. The temperature and pressure in the newly gained stellar shells become too large and are flung away in a gigantic thermonuclear explosion. The dwarf star remains intact and the cycle begins again – until the spectacle repeats itself.

It had been speculated that such explosions involve high energies. The two MAGIC telescopes recorded gamma rays with the value of 250 gigaelectronvolts (GeV), among the highest energies ever measured in a nova. By comparison, the radiation is a hundred billion times more energetic than visible light.

MAGIC was able to make its observations following initial alerts from other instruments measuring at different wavelengths. “The spectacular eruption of the RS Ophiuchi shows that the MAGIC telescopes' fast response really pays off: It takes them no more than 30 seconds to move to a new target," said David Green, a scientist at the Max Planck Institute for Physics and one of the authors of the paper in Nature Astronomy.

After the explosion, several shock fronts propagated through the stellar wind from the Red Giant and the interstellar medium surrounding the binary system. These shock waves work like a giant power plant in which particles are accelerated to near the speed of light. The combined measurements suggest that the gamma rays emanate from energetic protons, nuclei of hydrogen atoms.

"This also makes nova outbursts a source of cosmic rays," explains David Green. "However, they tend to play the role of local heroes – meaning to only contribute to the cosmic rays in the close neighborhood. The big players for cosmic rays are supernova remnants. The shock fronts created from stellar explosions are far more violent compared to novae.

To fully understand the complicated interplay of violent events with the interstellar medium in the Milky Way, more observations like those reported now will be necessary. The MAGIC collaboration will therefore continue to look for "restless" objects in our Galaxy and beyond.