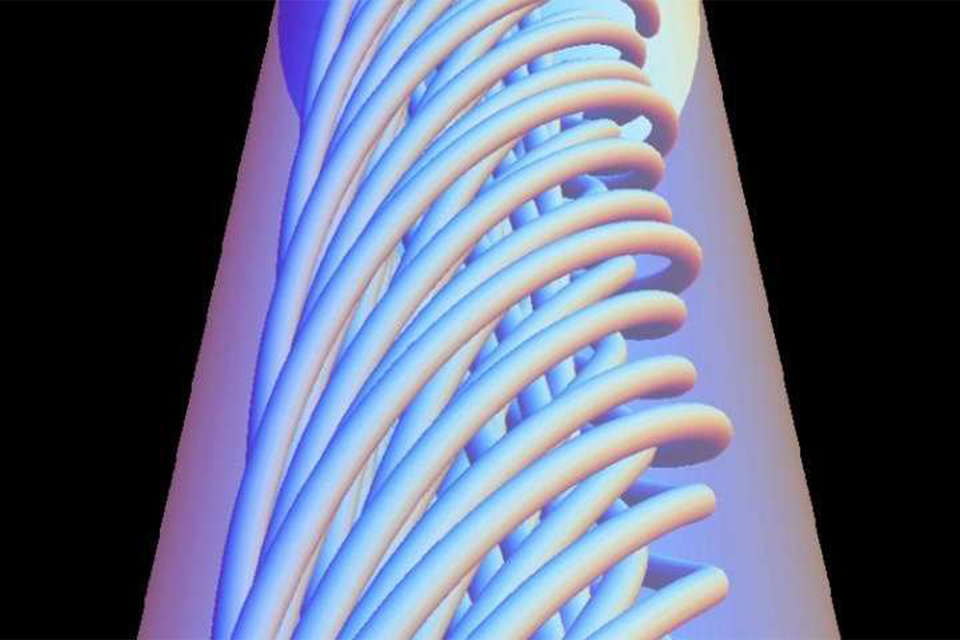 Researchers at the Max Planck Institute for the Science of Light in Erlangen have discovered a new mechanism for guiding light in photonic crystal fibre (PCF). PCF is a hair-thin glass fibre with a regular array of hollow channels running along its length. When helically twisted, this spiralling array of hollow channels acts on light rays in an analogous manner to the bending of light rays when they travel through the gravitationally curved space around a star, as described by the general theory of relativity.

Optical fibres act as pipes for light. And just as the inside of a pipe is enclosed by a wall, optical fibres normally have a light-guiding core, whose glass has a higher refractive index than the glass of the enclosing outer cladding. The difference in the refractive index causes the light to be reflected at the cladding interface and trapped in the core like water in a pipe. A team headed by Philip Russell, Director at the Max Planck Institute for the Science of Light, is the first to succeed in guiding light in a PCF with no core.

Photonic crystals give butterflies their colour and can also guide light

A typical photonic crystal consists of a piece of glass with holes arranged in regular periodic pattern throughout its volume. Since glass and the air have different refractive indices, the refractive index has a periodic structure. This is the reason these materials are called crystals—their atoms form an ordered, three-dimensional lattice as found in crystalline salt or silicon, for example. In a conventional crystal, the precise design of the 3D structure determines the behaviour of electrons, resulting for example in electrical insulators, conductors and semiconductors.

In a similar manner, the optical properties of a photonic crystal depend on the periodic 3D microstructure, which is responsible for the shimmering colours of some butterfly wings, for example. Being able to control the optical properties of materials is useful in a wide variety of applications. The photonic crystal fibres developed by Philip Russell and his team at the Erlangen-based Max Planck Institute can be used to filter specific wavelengths out of the visible spectrum or to produce very white light, for example.

As is the case with all optical fibres used in telecommunications, all conventional photonic crystal fibres have a core and cladding each with different refractive indices or optical properties. In PCF, the air-filled channels already give the glass a refractive index different from the one it would have if completely solid.

The holes define the space in a photonic crystal fibre

“We are the first to succeed in guiding light through a coreless fibre,” says Gordon Wong from the Max Planck Institute for the Science of Light in Erlangen. The researchers working in Philip Russell’s team have fabricated a photonic crystal fibre whose complete cross-section is closely packed with a large number of air-filled channels, each around one thousandth of a millimetre in diameter, which extend along its whole length.

While the core of a conventional PCF is solid glass, the cross-sectional view of the new optical fibre resembles a sieve. The holes have regular separations and are arranged so that every hole is surrounded by a regular hexagon of neighbouring holes. “This structure defines the space in the fibre,” explains Ramin Beravat, lead author of the publication. The holes can be thought of as distance markers. The interior of the fibre then has a kind of artificial spatial structure which is formed by the regular lattice of holes.

“We have now fabricated the fibre in a twisted form,” continues Beravat. The twisting causes the hollow channels to wind around the length of the fibre in helical lines. The researchers then transmitted laser light through the fibre. In the case of the regular, coreless cross-section, one would actually expect the light to distribute itself between the holes of the sieve as evenly as their pattern determines, i.e. at the edge just as much as in the centre. Instead, the physicists discovered something surprising: the light was concentrated in the central region, where the core of a conventional optical fibre is located.

In a twisted PCF, the light follows the shortest path in the interior of the fibre

“The effect is analogous to the curvature of space in Einstein’s general theory of relativity,” explains Wong. This predicts that a heavy mass such as the Sun will distort the space surrounding it – or more precisely, distort spacetime, i.e. the combination of the three spatial dimensions with the fourth dimension, time – like a sheet of rubber into which a lead sphere is placed. Light follows this curvature. The shortest path between two points is then no longer a straight line, but a curve. During a solar eclipse, stars which should really be hidden behind the Sun thus become visible. Physicists call these shortest connecting paths "geodesics".

“By twisting the fibre, the ‘space’ in our photonic crystal fibre becomes twisted as well,” says Wong. This leads to helical geodesic lines along which light travels. This can be intuitively understood by taking into account the fact that light always takes the shortest route through a medium. The glass strands between the air-filled channels describe spirals, which define possible paths for the light rays. The path through the wide spirals at the edge of the fibre is longer than that through the more closely wound spirals in its centre, however, resulting in curved ray paths that at a certain radius are reflected by a photonic crystal effect back towards the fibre axis.

A twisted PCF as a large-scale environmental sensor

The more the fibre is twisted, the narrower is the space within which the light concentrated. In analogy to Einstein’s theory, this corresponds to a stronger gravitational force and thus a greater deflection of the light. The Erlangen-based researchers write that they have created a “topological channel” for the light (topology is concerned with the properties of space which are conserved under continuous distortion).

The researchers emphasize that their work is basic research. They are one of the very few research groups working in this field anywhere in the world. Nevertheless, they can think of several applications for their discovery. A twisted fibre which is less twisted at certain intervals, for example, will allow a portion of the light to escape to the outside. Light could then interact with the environment at these defined locations. “This could be used for sensors which measure the absorption of a medium, for instance.” A network of these fibres could collect data over large areas as an environmental sensor.