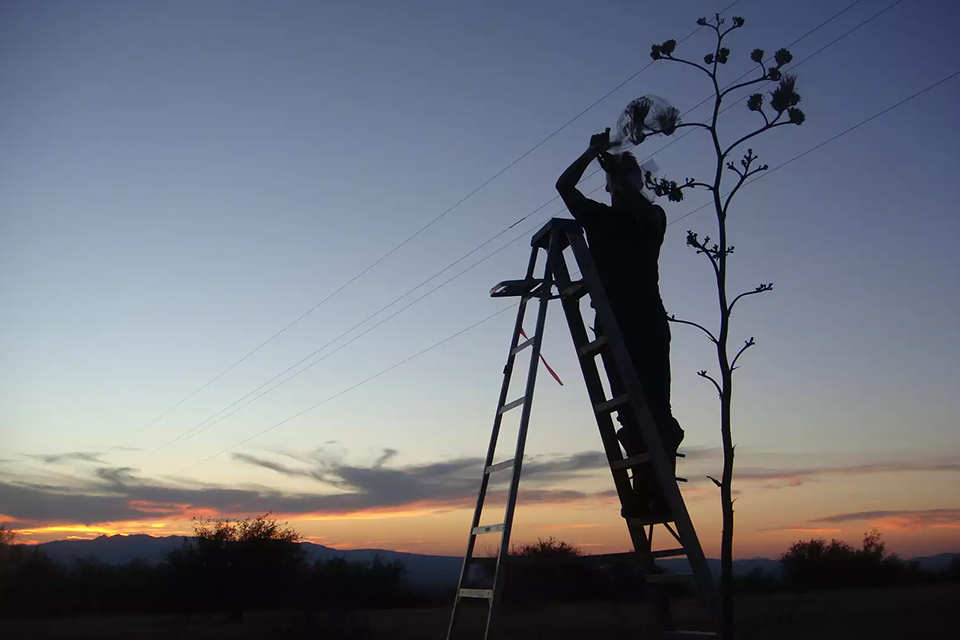 The moths can distinguish crucial from irrelevant odors

A research team at the Max Planck Institute for Chemical Ecology has discovered how tobacco hawkmoths are able to detect odors that are important to them against a complex olfactory background. By looking at the specific activity patterns that the odors triggered in the moths' brains the researcher showed that the sense of smell enables moths not only to perceive the intense floral odors of nectar sources, but also to find the rather unobtrusive smell of their host plants on which the larvae thrive. What is especially amazing is that tobacco hawkmoths can reliably detect the odors of their host plants despite the multitude of background odors emitted by many other plants in the vicinity.

Nocturnal moths, such as tobacco hawkmoths (Manduca sexta), rely primarily on their sense of smell when foraging for flowers that contain nutrient-rich nectar or searching for a host plant on which they lay their eggs. A team of scientists has now turned their attention to the question of how these insects are able to distinguish the odors that are crucial for survival from those that are unimportant in a natural environment full of a wide variety of different odors.

"Our question is based on the fact that the plants that are vital for the tobacco hawkmoth, that is nectar sources and suitable host plants for their offspring, are very sparse in their natural habitat. Apparently, however, these plants are nevertheless found by the moths. We wanted to know whether the olfactory system can also filter out weak odor signals if they provide the moths with clues that lead them to food sources or oviposition sites," says Sonja Bisch-Knaden, lead author of the study. In addition, the researchers were interested in whether female tobacco hawkmoths that have already mated are less receptive to floral odors and more interested in the odors of leaves where they can lay their eggs. This phenomenon has been observed in other moths, such as the moth of the cotton leafworm Spodoptera littoralis.

Odors from the natural habitat

For their experiments, the researchers collected odors from the natural habitat of tobacco hawkmoths in the U.S. state of Arizona that had been described in previous studies as important nectar sources for the moths or as host plants for the caterpillars, such as floral scents of agave, Mirabilis longiflora (sweet four o’clock) or datura. Moreover, the odors of various neighboring plants were collected in order to include as many odors as possible that tobacco hawkmoths encounter in their natural habitat.

The research team was careful to collect odors from the natural plant community that had already been attacked by animals or affected by the growth of neighboring plants. In addition, the odors were collected only at night, when tobacco hawkmoths are also active. In this way, the researchers wanted to get as close as possible to the natural odor mixture experienced by the moths at night. In total, the nocturnal odor emissions of 17 different plants were used in the experiments.

Subsequently, the perception of these odors was studied at the level of the antenna, i.e. the olfactory organ of the moths, and the level of the brain. For this purpose, Sonja Bisch-Knaden's team conducted experiments with virgin and mated female tobacco hawkmoths. In the physiological studies, electroantennographic recording of antennal activity was coupled with a gas chromatograph, which is used to analyze individual odors from an odorous mixture. Calcium imaging was also used to visualize the activity patterns of odor-processing neurons in the brains of tobacco hawkmoths that had been exposed to different odors.

“The most important nectar sources, such as agave and datura flowers, give off a strong odor to which the antennae and brain of a female tobacco hawkmoth also respond more strongly than to any other odor. Here, identification of the floral scent appears to be straightforward. This applies to both virgin and mated females, as the few host plants of the larvae are widely scattered throughout the habitat, and the egg-laying female must therefore travel long distances and refill her energy reserves constantly.

In contrast, host plants as oviposition sites have only a very weak odor, but individual odor components are nevertheless recognized by the antennae. The activity patterns that these odors evoke in the brain are very different from the activity patterns of other plant odors. This difference becomes even greater after mating, as the female is then virtually unaware of the odor of the other plants that are not candidates for egg-laying. It is still difficult to explain how the moths find these plants in nature on the basis of their odor alone, since the plant odors cannot be perceived individually, as in our study, but always in a mixture," explains Sonja Bisch-Knaden.

Tobacco hawkmoth caterpillars specialize on very few host plants, including the leaves of Datura wrightii and the devil's claw Proboscidea parviflora (named for the horned seed pods). These plants occur only very sporadically in the natural habitat of tobacco hawkmoths. The odors emitted by these host plants do not contain special molecules, but odor components that are also found in countless neighboring plant species. However, it is the plant-typical mixing ratio of the odors that is apparently crucial in ensuring that the moths unerringly find the right oviposition sites.

Sonja Bisch-Knaden and her team now want to study related hawkmoth species for comparison. Although these moths drink nectar from the same flowers, their larvae grow on different host plants. In the experiments, female tobacco hawkmoths responded strongly, especially after mating, to the odors of host plants of these other hawkmoth species: a wild vine, which is the host plant of Achemon sphinx moth caterpillars, and the branches of the desert-willow Chilopsis linearis, which is the host plant for the hawkmoth species Manduca rustica. "We interpreted this finding as a kind of stop signal for egg laying. Now it would be interesting to study what the activity patterns in the brain of the other hawkmoth species look like when they are stimulated with the same plant odors, but which have a different meaning for the studied moth," the researcher says.

In the course of evolution, an incredible number of different insect species has evolved as a result of adaptations to the defense mechanisms of plants. Chemical communication in the form of sex pheromones plays an important role in speciation. Any modification of this signal, which is essential for mating, can be an important isolation mechanism when new species arise. Specialization on specific host plants, which is linked to adaptations to plant defenses, is usually accompanied by a preference for the odors of these plants. An aversion to the odors of plants on which competitors feed is therefore not surprising. Studies like this help to better understand the complex chemical interactions between plant odors and the multitude of insects that interact with these plants.